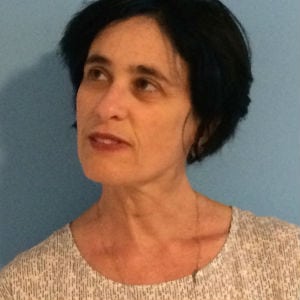 Gil Hochberg is Ransford Professor of Hebrew and Comparative Literature, and Middle East Studies at Columbia University. Her research focuses on the intersections among psychoanalysis, postcolonial theory, nationalism, gender and sexuality. She has published essays on a wide range of issues including: Francophone North African literature, Palestinian literature, the modern Levant, gender and nationalism, cultural memory and immigration, memory and gender, Hebrew Literature, Israeli and Palestinian Cinema, Mediterraneanism, Trauma and Narrative. Her first book, In Spite of Partition: Jews, Arabs, and the Limits of Separatist Imagination (Princeton University Press, 2007), examines the complex relationship between the signifiers “Arab” and “Jew” in contemporary Jewish and Arab literatures. Her most recent book, Visual Occupations: Vision and Visibility in a Conflict Zone (Duke University Press, 2015), is a study of the visual politics of the Israeli-Palestinian. She is currently writing a book on art, archives and the production of historical knowledge.