Anupama Rao Featured in Podcast on “Memoirs of a Dalit Communist”

ICLS Director Anupama Rao spoke recently on the New Books Network podcast on her work editing a translation of Memoirs of a Dalit Communist. To listen to the podcast, visit the link here.

R.B. More (1903–1972) was a leader in Babasaheb Ambedkar’s movement, a trade unionist and a member of the Communist Party of India (Marxist). More’s life, narrated in his words and those of his son Satyendra More, illuminates the conflict between the promise of Marxist emancipation and the hard reality of the hierarchies of caste. His radicalism challenged both the limits of the politics of caste and the politics of the Left; his was a politics that frontally challenged the rigidities of the caste system and of the class structure. Memoirs of a Dalit Communist: The Many Worlds of R.B. More (Leftword Books, 2020), written in Marathi, is here published for the first time in English. This is a rare work that brings together family history, political thought, and the social experience of urban workers whose lives are intertwined with the city they built, Bombay.

Wandana Sonalkar taught economics with a focus on feminism, caste, and development at Dr. Babasaheb Ambedkar Marathwada University in Aurangabad and the Tata Institute of Social Sciences in Bombay. She retired in 2017. Since then, she has been working as an independent researcher, writer ,and translator. Apart from the text that we are discussing today, she has also translated, We Also Made History which examines the role of women in the Ambedkar movement. Her other recent publication is a first-person narrative titled Why I am not a Hindu Woman: A Personal Story. At present, she is a member of the Executive Council of the Indian Association for Women’s Studies (IAWS) and working as Editor of the association’s newsletter. (118)

Anupama Rao teaches history at Barnard College and at the Department of Middle Eastern, South Asian, and African Studies at Columbia University, New York. She has a wide range of research and teaching interests—gender and sexuality studies, caste and race, historical anthropology, social theory, comparative urbanism, and human rights. In 2009, she published The Caste Question: Dalits and the Politics of Modern India. Currently, she is working on a book about the political thought of Indian social reformer and political leader B. R. Ambedkar, titled Ambedkar in America, as well as a project on Dalit Bombay, which explores the relationship between caste, political culture, and everyday life in colonial and postcolonial Bombay. She is the editor of Memoirs of A Dalit Communist which we are discussing today.

Sanjukta Poddar is a postdoctoral Teaching Fellow in the Department of South Asian Languages and Civilizations and the Department of Race, Diaspora, and Indigeneity at the University of Chicago. Her research explores the intersection of race and caste, urban history, and print cultures of South Asia. She is also a research fellow for NPR’s Peabody-award winning history podcast, Throughline for Autumn 2022. 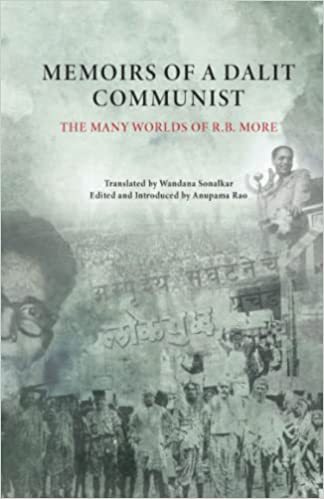