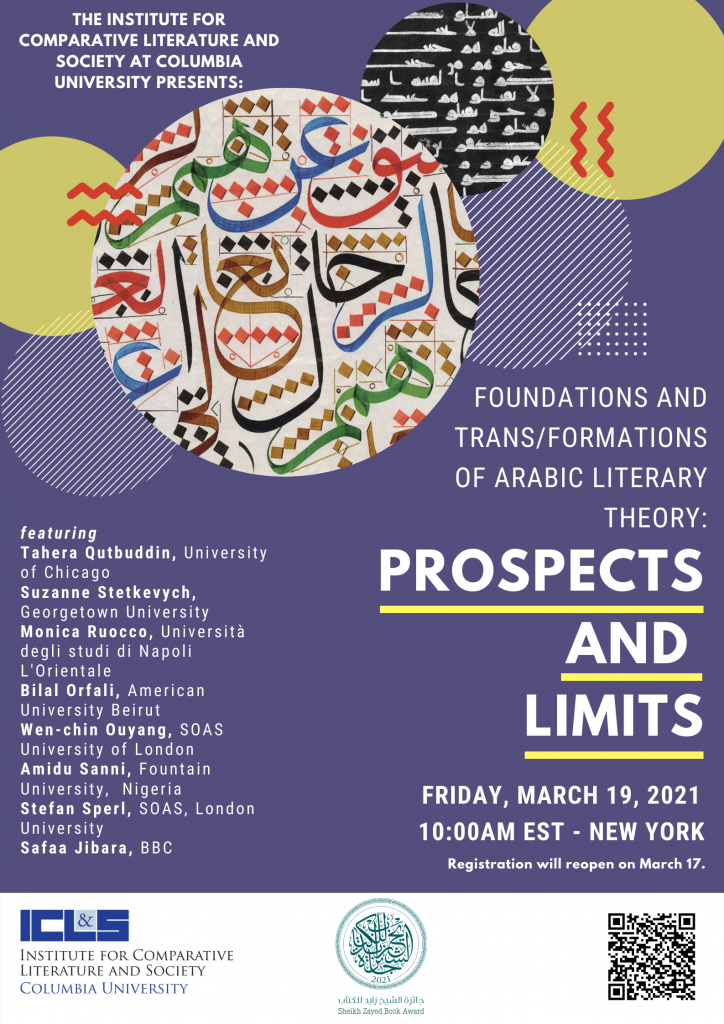 Foundations and Trans/Formations of Arabic Literary Theory: Prospects and Limits

Hosted by the Columbia University (Institute for Comparative Literature and Society) and the Sheikh Zayed Book Award Committee.

Please see the guidelines for participating and additional information below

[*Dates subject to change due to current health situation.]

The primary focus of this conference is on Arabic literary theory, engaging with its development from the pre-modern era up to the present. Literary Theory is not limited to the classical or premodern reading of poetics and adab, but also inclusive, and very strongly, of transformations since the late nineteenth century. It is a navigation among the fields of culture industry, circulation, dissemination, authorship, copyright issues, arts, cyberspace.

We invite scholars to explore a plethora of thematic issues tied to the challenges of mapping, reconstructing, and studying varied sets of Arabic literary theoretical frameworks with the aim of identifying cross-temporal and trans-local conceptualizations and terms for a genealogy of Arabic literary theory. While focusing on the formation, transformation, re-organization and enduring legacy of pre-modern literary conceptualizations across the Arabic literary continuum, the conference approaches modernist literary explorations as invitations to the study of paradigmatic shifts in Arabic literary theory. The conference aspires to cement a dialogue between classical and modern epistemic systems while questioning their boundaries. It also encourages new explorations in post-nahḍah interdisciplinary forays, engagements with social science, and the role of individual writers in initiating or consolidating sites of revolt or turns to authentication.

-The presence or disappearance of the qaṣīdah
-Literary tarassul [epistolary art]
-Contending with Orientalism
–Nahda literary theory
-Theories of race
-Genesis of narrative writing and storytelling
-The theoretical grounds for ‘plagiarism’
-Philological explorations
-Birth of the Arabic novel
-The dispute with al-muḥdath and al-muḥdathūn
-Rise of al-badī‛ compositional style and the resulting badī‛iyyah
-Rhetoric and its multiple dimensions
-Identity, social media, and cyberspace
-visual and spatial narrative forms
-Material and immaterial cultures
-Deviation and dissent
-Arabs and their others: Explorations beyond Eurocentric boundaries
-Exilic poetics and ḥanīn, self-narrative and biography; refugee and migration writing

The conference requests active participation, polished papers, and salient contributions to Arabic literary knowledge. Participants are welcome to approach literary texts as “insiders,” thus also bridging the gap between literary, social, linguistic, and semantic studies. With some focus on modernity and its byways.

The whole conversation should be rooted in theory.

All interested scholars were encouraged to register (registration closed January 12) to follow the preliminary discussion, the keynote speakers’ introductory notes, and participate in the debate. No paper submission is requested at this point. It is sufficient to indicate the topics of major interest during the online registration and if you intend to submit a contribution or not.

Join us in Paris and New York Plenary Sessions

We ask that abstract submissions be written in English. Translation will be provided at the event.

Only new contributions would be considered. Both plenary meetings expect polished, publishable papers for JAL, and then as proceedings in Trans/formations Book Series.

Please specify if you would like to participate only in the first session, or the second, and/or the virtual panel discussion. A note to this effect on the left side of the abstract is appreciated.

Notifications about abstracts selection process will be sent by the end of March. *Due to the deadline extension, selection notifications will be delayed from the original planned announcement of March 6.

In planning since 2019, this conference was collaboratively organized with the Committee of the Sheikh Zayed Book Award

Questions should be emailed to arabicliterarytheory@gmail.com. 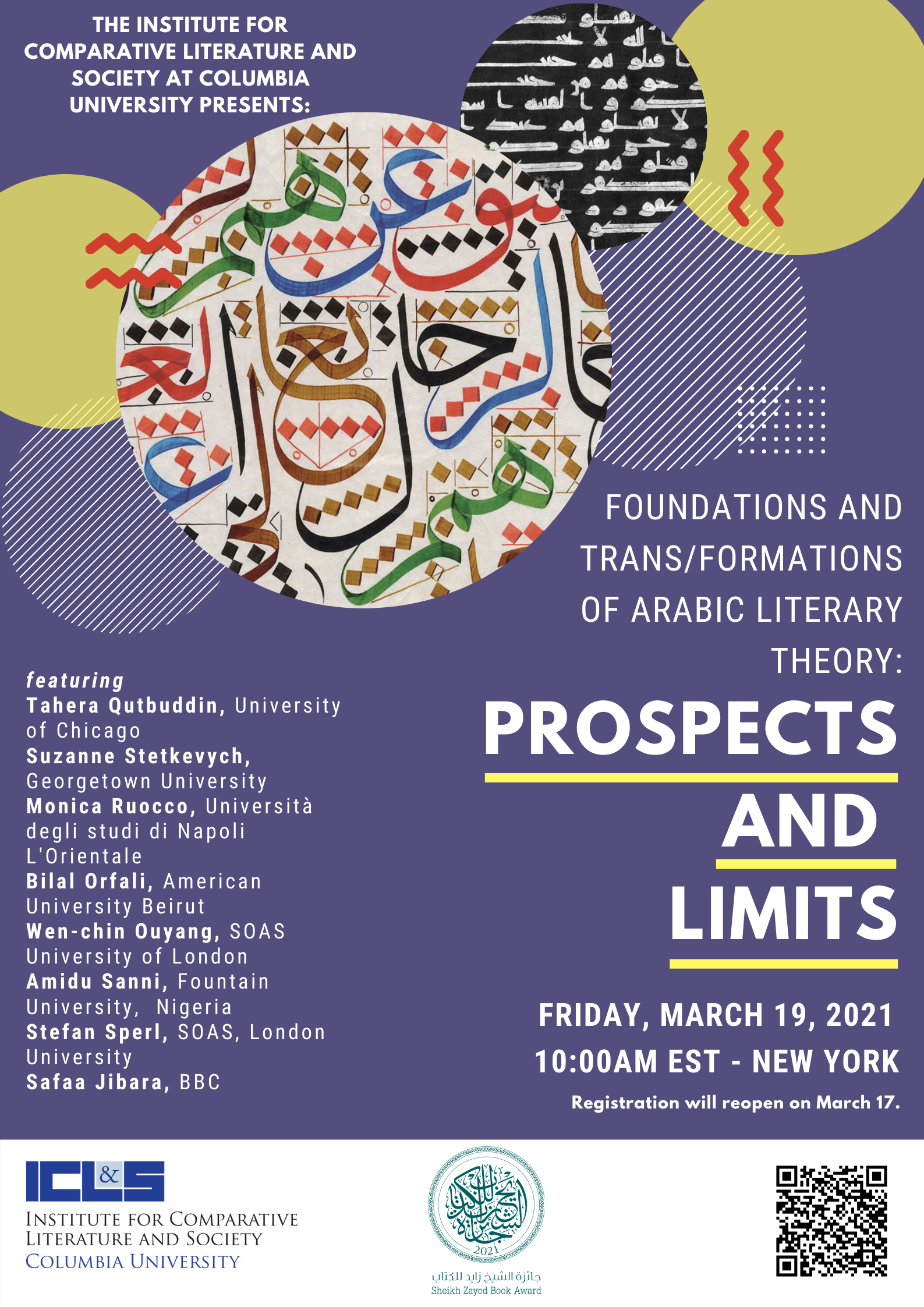