The full event can be viewed here:

What is the role of the nation in today’s social and political landscape ? What aspirations of social cohesion, equality, longevity and prosperity are expressed through the nation as both a symbolic structure and an ongoing sociopolitical project? To what extent are these aspirations disrupted and undermined, always in the name of the nation? What projects of violence, erasure and disavowal lie behind the national fantasy? How do they still haunt the national everyday? How does the nation still matter and could it also matter differently?

In the week celebrating the 200 years since the Greek War of Independence, we want to return to these questions in the frame of our Local Cases, Global Debates series. Indeed, Greece has been a prime example of a modern nation-building process, involved in the dynamics of enlightenment, ethnicity, (crypto)colonialism, orientalism, capital extractionism and the North-South dialectic. Modern Greek studies, as a field, has been framed time and again as a response to such questions. Rethinking Modern Greek Studies proposes to re-visit a classic text of the field: Stathis Gourgouris’s Dream Nation: Enlightenment, Colonization and the Institution of Modern Greece, published in the 1990s, in a period of heightened nationalist feeling esp. in the Balkans. We invite Stathis Gourgouris to join us for an open discussion on the legacies and the contemporary relevance of his 1996 influential monograph. Joined by colleagues in the field, we want to reflect both on the national/postnational legacies of Hellas, but also on the changes in Modern Greek Studies since the first publication of Dream Nation.

We are, of course, mindful of the moment this discussion is being held, in all the political complexity as well as the celebratory overtones currently experienced in Greece, and we aim to take this critically into account.

Dream Nation: 200 years on, will be followed by What Greece? an open-mic event on April 21, and “We have never been racist”: Rethinking Race and Ethnicity in Greece, on 17 May: these webinars comprise our network’s tripartite contribution to debates around the bicentennial of the 1821 Greek War of Independence by engaging with scholars, artists, filmmakers, and authors in different formats.

On the occasion of this webinar, we will also be launching the new dedicated website of our network under the title “Greek Studies Now” 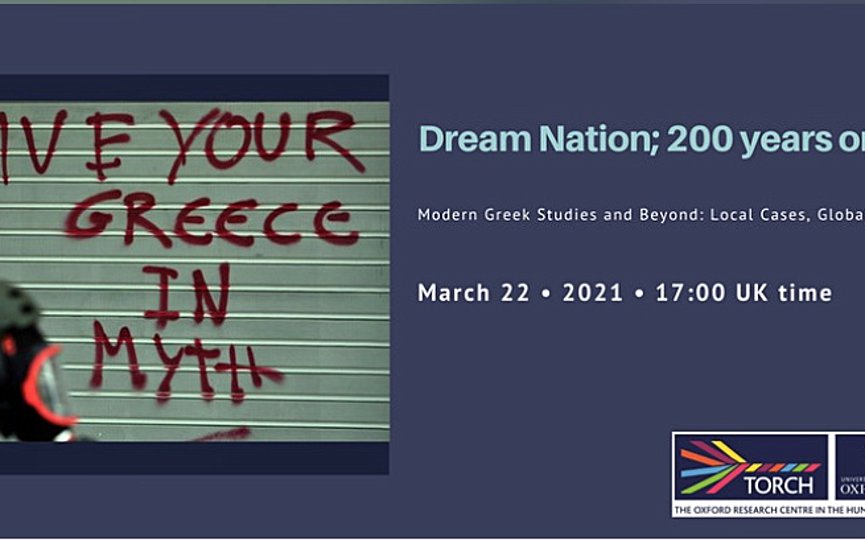