Frances Negrón-Muntaner interviewed on The Takeaway, and speaks on the Latino vote for The Texas Observer and Palabra

Professor of English and Comparative Literature Frances Negrón-Muntaner spoke about the Latino vote in an article published by Palabra and in The Texas Observer.

“There’s no single Latino story about the relationship of citizens and the state when it comes to elected power. There are multiple stories.”

She was also interviewed on The Takeaway, where she discussed the election of Puerto Rico’s next governor and the experience of voters in Puerto Rico.

Well, I like to say a few things about the extraordinary things that happened in the election because, on the one hand, we saw that Pierluisi is likely to win, which is a very establishment choice. At the same time, we have to point out that there were some things that shifted in this election. For instance, the pro-independence candidate, Juan Dalmau, obtained 13.4% so far of the vote, whereas, in the past, pro-independence candidates would have had received less than 5%. The combined independence party and independent candidates, together, obtained more than 30% of the vote, actually, more than Pierluisi received.

Negrón-Muntaner is also the founding director of the Media and Idea Lab and the Latino Arts and Activism Archive. You may read or listen to the rest of her interview by visiting The Takeaway. 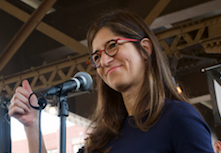