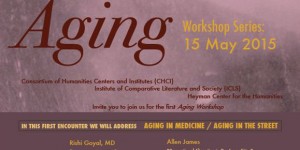 The workshop opened with the thought-provoking short documentary “It Don’t Mean a Thing if It Ain’t Got that Swing” by director David Shuff, who filmed the reaction of Alice Barker, a vibrant African American resident in a Bronx nursing home, to archival footage of her years as a jazz dancer from the 1930s through the 1960s. Following this, the morning’s panel addressed “Aging in Medicine” and brought into conversation the work of several healthcare practitioners with researchers who traveled beyond the hospital. Rishi Goyal, MD, PhD, interrogated how emergency departments determine the possibility of discharge of a patient—a surprisingly easy formula based on a patient’s age minus 100, but also brought into the light the specificity of age-related disorders challenging the notion of “aging” as a diagnosis. Robert Sladen, MD, Director of the SICU at Columbia/Presbyterian Hospital, addressed issues of aging in the context of the ICU. Sladen examined the scale across which “fragility” is constituted among the elderly, while also reflecting heavily on his own experiences as an intensivist in order to help understand “aging” better. Robert Cohen, MD, drew from over three decades as a practicing primary care physician in order to access the anxieties and apprehensions of his patients as they aged and as their health demanded new considerations. Finally, anthropologist Adriana Garriga-López, drawing on her research on sex workers dealing with HIV/AIDS in Puerto Rico (which she and many other researchers and activists consider to be a US colony), offered critical attention to the ways in which race, sexuality, and socioeconomic disadvantage complicate how aging may be rendered doubly invisible out in the street.

The workshop’s afternoon panel extended its orientation beyond the space of the clinic in order to think about “Aging in the Street”—within the prison, the inner city, and even outside the US. Othon Iliopoulos, MD, spoke on the impact that rapid changes in genetics and precision medicine have brought to the treatment plans of elderly cancer patients. Epidemiologist Charles Branas offered an examination of the subtle and often unnoticed relationship between economic hardship, loneliness, futility, and suicide among Greece’s elderly population who live in the poverty induced by the current financial crisis. Psychologist Geraldine Downey spoke to the possibilities of using a life-course development perspective to inform policy on the release of aging prisoners, based on an already existing program of re-entry that has showed promise for lessening rates of recidivism among released elderly women. Allen James provided the afternoon panel with a necessary consideration of the historical fragmentation of African American and Latino communities in the New York’s inner cities in regards to inner city violence. His work as a program manager for  Brooklyn’s Save Our Streets program deals with how generational alienation that African Americans and Latinos experience in America’s poorer neighborhoods has effectuated the disarticulation of ties between youth and the elderly resulting in violence that should be preventable. Finally, Robert Cohen was back for a second intervention, reflecting on his many years of involvement at the intersections of medicine and social justice, especially at the point of prisons and AIDS.

One of the most valuable aspects of the Aging Series’ first workshop was the space allotted for conversation among the participants and invited guests. Within the closed context emerged a very productive and not at all finished dialogue that spoke more broadly to questions surrounding end-of-life decision-making, infrastructures and access to healthcare resources, and power that is experienced asymmetrically across bodies. Many of the interventions and interjections were concerned with the critical space between structure and agency: how to guarantee autonomy of the patient or the subject in the face of overwhelming institutions that constrain choice. Altogether, the first encounter of the Aging Series has incited a number of possibilities for research and critical engagement that we will continue confronting and exploring.