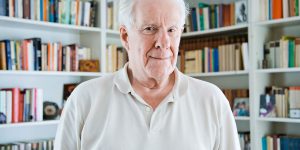 This workshop requires an application. Please see directions below.

Graduate student workshop: Being and Event

The Heyman Center for the Humanities, Common Room, Columbia University

The lecture on the 18th of October is open to the public.

To apply for the workshops, please send your name, departmental affiliation, and a brief description of your research interests and particular interest in Alain Badiou’s work. Please state also your language proficiency. (The workshops will be held in English, but French proficiency is preferred.)

The applications can be sent to badiouworkshops@gmail.com by October 1st.

Selected participants will be notified by October 12th, 2017.

Readings will be sent to selected participants via e-mail.

Alain Badiou is a French philosopher and playwright. He is a professor emeritus and former chair of the Department of Philosophy of the École Normale Supérieure in Paris and one of the founding members of the Faculty of philosophy of the Université Paris VIII. His major works include the two volumes of Being and Event and Being and Event 2.: Logics of Worlds. His philosophical oeuvre connects continental and analytical philosophical traditions along with his reflections on set theory and contemporary mathematics. The third volume of Being and Event is to be published in 2017/18 under the title The Immanence of Truths.

Kenneth Reinhard is Associate Professor and Director of Graduate Studies in the Department of Comparative Literature, UCLA. He is the author, with Slavoj Žižek and Eric Santner of The Neighbor: Three Inquiries in Political Theology (U. of Chicago Press, 2005), and with Julia Reinhard Lupton, of After Oedipus: Shakespeare in Psychoanalysis (Cornell UP, 1993), as well as articles on Freud, Lacan, Levinas, Henry James, Jewish Studies, and the Bible. In 2004 he founded the University of California Seminar in Experimental Critical Theory. Together with Susan Spitzer, he is currently working on the translation of Alain Badiou’s seminars and his forthcoming book Immanence of Truths.

The graduate workshop is now available on video! Check out the event on Youtube: