Bandung Humanisms: Towards a New Understanding of the Global South 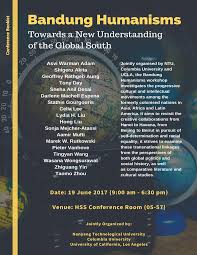 The Nanyang Technological University (NTU) cordially invites you to join an international workshop entitled “Bandung Humanisms: Towards a New Understanding of the Global South” on 19 June 2017.

In 1955, the first large-scale political congregation among the newly independent countries took place in Bandung, Indonesia. This conference aimed to oppose imperialism and colonialism, promote economic and cultural cooperation among African and Asian countries, and pave the path towards the Non-Aligned Movement. The Bandung Conference has been widely regarded as the starting point at which the previously voiceless Afro-Asian nations became vocal in their demand for autonomy during the Cold War.

Despite the abundance of existing research on the geopolitical significance of this event, the cultural legacy of Bandung remains understudied. In 2015, the Institute for Comparative Literature and Society at Columbia University and the Seminar in Global Critical Humanities at the University of California at Los Angles (UCLA) jointly launched an interdisciplinary research project named “The Legacy of Bandung Humanisms,” laying the foundation for the forthcoming workshop at the NTU.

Jointly organized by the NTU, Columbia University (part of the joint Bandung Humanisms Initiative between ICLS and CSSD) and UCLA, the Bandung Humanisms workshop scheduled in June 2019 investigates the progressive cultural and intellectual movements among the formerly colonized nations in Asia, Africa and Latin America. It intends to revisit the creative collaborations from Hanoi to Havana, from Beijing to Beirut in pursuit of self-determination and racial equality; it strives to examine these transnational linkages from the perspectives of both global political and social history and comparative literature and cultural studies. Sixteen scholars and PhD candidates from Singapore, China, United States, United Kingdom, Japan, Indonesia, Thailand, Lebanon, Poland, the Philippines, India, and Myanmar will share their research findings, covering the fields of international relations, sociology, literature criticism, cultural studies, history and sociology.