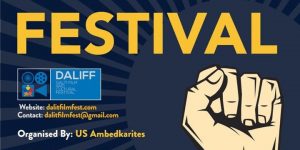 With the emergence of caste centric films in the mainstream Indian (also, in Nepal) film industry in recent years and its notable success has dawned upon the nu-genre of film making—the Dalit Cinema. Dalit Cinema is a newer technique to underscore the importance of art and creativity in upholding the human loving virtues simultaneously standing guard to fighting the ills of society.

The film festival is a product of the legacy of B.R. Ambedkar, arguably one of Columbia University’s most illustrious alumni, whose ideas and activism has shaped the world’s largest democracy, India. The Ambedkar Initiative is dedicated to exploring genealogies of radical democracy outside the North Atlantic; addressing the complex interrelationship of identity inequality in global frame; and enabling emergent affinities and solidifying existing solidarities in the struggle for recognition and social justice.

Historically the experiences of Dalit in the films, erstwhile untouchables or the lower castes (over 250 million people worldwide) have been camouflaged by appropriating their voices into a caste neutral character. Oft-repeated incidents of suppression of Dalit voices and Dalit assertion has maintained the cultural hegemony of dominating classes in India. Whenever Dalit characters are presented on screen, it is either to degrade the humanity of the Dalit or term it as a despicable character worthy to receiving humiliation. Such casteist gestures have downgraded the quality of Dalit cultural life in India further pushing them down to the perils of humane existence.

RSVP and ticket are required (click here) for admittance into the event.