Field Notes from the Muslim International with Sohail Daulatzai 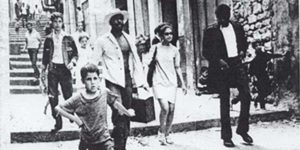 Center for Science and Society

Visual artists and filmmakers, writers and hip-hop poets played a key role in linking discontent and unrest in Harlem, Los Angeles and Chicago with anticolonial revolutions in Algeria, Egypt, Palestine, and elsewhere, and frequently looked to struggles in the Muslim Third World for inspiration and solidarity in the quest for social justice. In the words of Malcolm X said in 1962, “the same rebellion, the same impatience, the same anger that exists in the hearts of the dark people in Africa and Asia, is existing in the hearts and minds of 20 million black people in this country who have been just as thoroughly colonized as the people in Africa and Asia.”

This presentation traces the contours of the “Muslim International” as a conceptual and material space of resistance animated through political culture and cultural politics. The focus will be on the archive of word, sound and image, which allowed artists and activists to imagine themselves not as national minorities but as part of a global majority.

Sohail Daulatzai is Associate Professor in the Departments of Film and Media Studies; African American Studies; and the Program in Global Middle East Studies at the University of California, Irvine. He is the author of Fifty Years of “The Battle of Algiers”: Past as Prologue; Black Star, Crescent Moon: The Muslim International and Black Freedom beyond America; and co-editor of Born to Use Mics, a literary remix of Nas’s album Illmatic. He is the curator of the celebrated exhibit, Return of the Mecca: The Art of Islam and Hip-Hop, and editor of the limited edition, companion commemorative book of the same name. His writings have appeared in The Nation, Counterpunch, Al Jazeera, Souls, Wax Poetics, and Artbound, amongst others.

He also curated the exhibit Histories Absolved: Revolutionary Cuban Poster Art and the Muslim International, which showcased the work of the Havana-based OSPAAAL (Organization of Solidarity with the People of Africa, Asia and Latin America) and their political graphic art of the 1960’s, ‘70’s and ‘80’s with Palestine, Egypt, Syria, Afghanistan and other Muslim majority countries. He is the founder of Groundings, a conversation series that has included Yasiin Bey, Immortal Technique, Chuck D, Rosa Clemente, dream hampton, Brother Ali, Robin D.G. Kelley and Jasiri X.