Global Language Justice: An Interdisciplinary Conference on the Long-Term Planetary Impact of the Life and Death of Languages 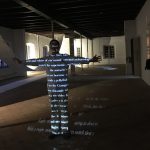 The Andrew W. Mellon Foundation
Institute for Social and Economic Research and Policy in the Faculty of Arts and Sciences

This  two-day conference to deepen the ongoing discussions and public outreach instituted by our Sawyer Seminar over the past year and a half, which the Institute for Comparative Literature and Society (ICLS) initiated in 2016 with a Sawyer Seminar grant from the Andrew W. Mellon Foundation. The conference is cosponsored by the Institute for Social and Economic Research and Policy at Columbia University and will host scholars involved in producing an edited volume and a companion digital platform on the topic of Global Language Justice.  Participants will include human rights specialists, policymakers, computational linguists, anthropologists, literary scholars, and activists who will address a range of problems typically kept separate: a) the social effects of English monolingualism; b) the influence of technology on language vitality; c) the role of translation and interpretation in legal redress and social wellbeing; and d) the potential of the arts to enact justice and revivify language communities. The goal of the conference will be to book chapters for a volume that will establish, authoritatively, this exciting new field of academic research. We intend for this collection to clarify the meaning, vicissitudes, and scope of the field, and to establish a solid foundation for innovative policy work that includes numerous stakeholders—grassroots activists, translators, legal and medical practitioners, and digital innovators.

Contributors include: Deborah Anderson on digital infrastructures of script preservation; Isabelle Zaugg on the ancient Ge’ez script of Ethiopia and its survival through digital media; Moria Paz on language rights as a legal problem; and Daniel Kaufman on grassroots organizing around endangered languages, immigration and the city.

This event is closed and not open to the public.