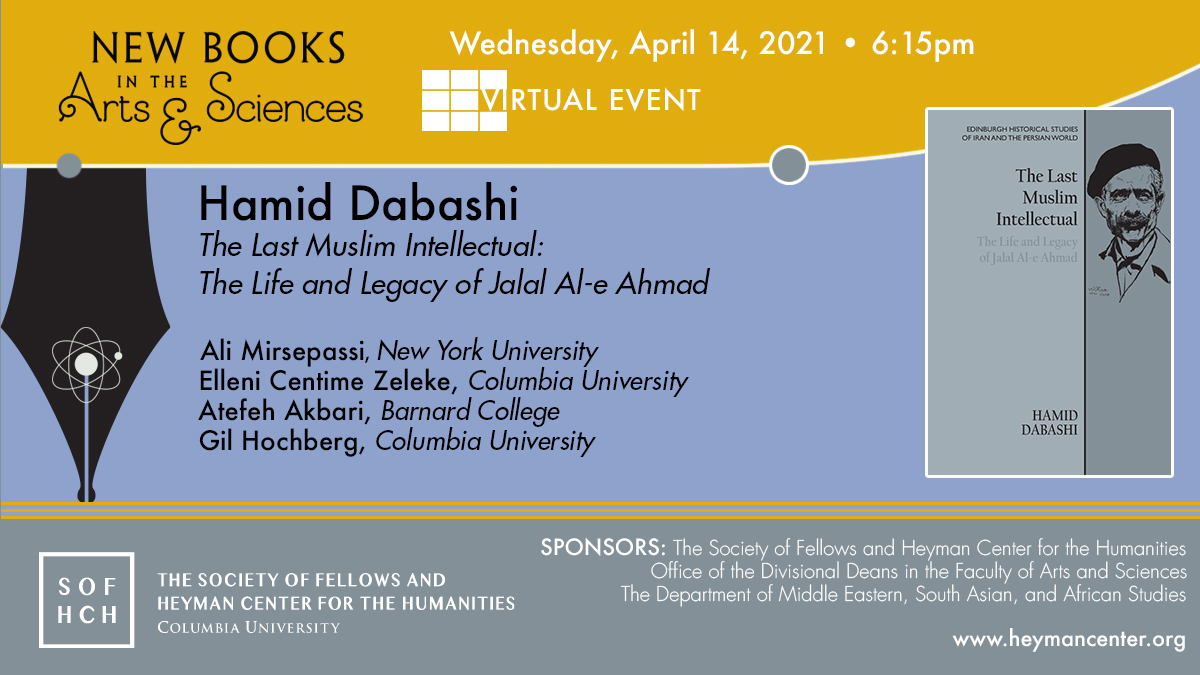 The Society of Fellows and Heyman Center for the Humanities

The Society of Fellows and Heyman Center for the Humanities
Office of the Divisional Deans in the Faculty of Arts and Sciences
The Department of Middle Eastern, South Asian, and African Studies

The Last Muslim Intellectual: The Life and Legacy of Jalal Al-e Ahmad
By: Hamid Dabashi

In this social and intellectual biography, Hamid Dabashi contends that Jalal Al-e Ahmad was the last Muslim intellectual to have articulated a vision of Muslim worldly cosmopolitanism, before the militant Islamism of the last half a century degenerated into sectarian politics and intellectual alienation from the world at large. Dabashi places Al-e Ahmad beside other towering critical thinkers of his time, showing how he personified a state of Muslim anticolonial modernity that has now disappeared behind the smokescreen of sectarian politics. This unprecedented engagement with Al-e Ahmad’s life and legacy is a prelude to what Dabashi calls a ‘post-Islamist Liberation Theology’. The Last Muslim Intellectual expands the wide spectrum of anticolonial thinking beyond its established canonicity by adding a critical Muslim thinker to it – an urgent task, if the future of Muslim critical thinking is to be considered in liberated terms beyond the dead-end of its current sectarian predicament.

Registration is required. Click here to register via Zoom.

Hamid Dabashi is the Hagop Kevorkian Professor of Iranian Studies and Comparative Literature at Columbia University. His books include Authority in Islam (1989); Theology of Discontent (1993); Truth and Narrative (1999); Close Up: Iranian Cinema, Past, Present, Future (2001); Staging a Revolution: The Art of Persuasion in the Islamic Republic of Iran (2000); Masters and Masterpieces of Iranian Cinema (2007); Iran: A People Interrupted (2007); and an edited volume, Dreams of a Nation: On Palestinian Cinema (2006).

Elleni Centime Zeleke is Assistant Professor in the Department of Middle Eastern, South Asian, and African Studies at Columbia University. She is the author of Ethiopia In Theory: Revolution and Knowledge Production,1964–2016, among other published works.

Atefeh Akbari is Term Assistant Professor of English at Barnard College. Her current book project is a cross-cultural comparison of Iranian and Caribbean fiction and poetry from the 1960s through the 1980s. An article from this project, titled ““Where Is the Friend’s Home?”: New World Landscapes in Sohrab Sepehri’s Poetic Geography,” has been published in the Cambridge Journal of Postcolonial Literary Inquiry (September 2019).

Gil Hochberg is Ransford Professor of Hebrew and Comparative Literature, and Middle East Studies at Columbia University. She is the author of In Spite of Partition: Jews, Arabs, and the Limits of Separatist Imagination; and, most recently, Visual Occupations: Vision and Visibility in a Conflict Zone, among other published works.