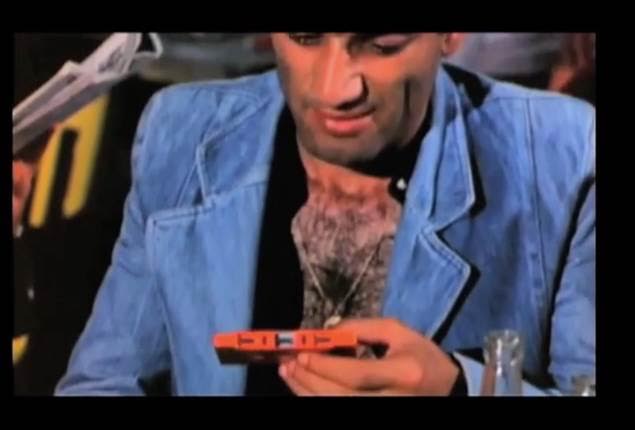 Omar Gatlato (1978), directed by Merzak Allouache, is a feature film centered a young Algerois working in the government fraud detection agency by day and sleeping in a stifling room with four siblings by night. He spends most of his time listening to Egyptian and Indian pop music on a small portable tape player, or hanging out with his friends in public space, trading fantasies of sexual exploitation. When Omar is robbed, a friend lends him a replacement player. Inside, he finds a used tape and on it a young woman has recorded herself speaking tentatively about what she wants, what she feels. Omar becomes obsessed with the woman’s voice and the film becomes the record of his yearning for an encounter with her.

The tape-player gives Omar access to imaginary spaces and communities, allowing him to abstract himself from the constraining circumstances of his life. Yet, the capacity for abstraction that the machine grants Omar does not prepare him for the consequences of his fantasy—he loses his nerve and backs out of a painstakingly arranged meeting with the young woman on the tape at the last minute. Omar Gatlato thus maps a widening breach between the fantasy of unequivocal subjective emancipation and the material conditions of that imagination in the context of post-colonial nationalism, especially as this breach threatens stable ideations of masculinity.

The critical literature on Omar Gatlato reads the film as a comment on the male subject’s loss of virility in the wake of changing social codes in Algerian society post-war. I will suggest the loss of stable masculinity is also the result of trauma related specifically to the war of independence, but one equally related to the effects of colonization more broadly. Moroccan literary scholar Abdelmagid Hannoum has argued that in the Algerian context the imposition of modernity as discourse and infrastructure—along with the abstraction from the body it entailed—was itself a form of violence that broke apart the actually existing symbolic worlds. In this preliminary sketch for the third chapter of my dissertation, I will read Merzak’s work through Hannoum’s to suggest that Omar Gatlato is the intimate portrait of a modernist Maghribi subject as one deeply marked by symbolic violence, rather than as a “failed” masculine subject.