On South-South Circulations, Histories and Possibilities in the Arab World 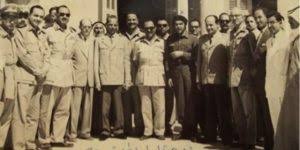 The Institute for Comparative Literature and Society

Seven- years after the Arab uprisings seemingly shook the Arab nation-state order that was left behind in the wake of the end of formal British and French imperial presence in the region, the content and the form of that order has been both entrenched and reconfigured. In view of this, this discussion asks two interrelated questions that pertain to an understanding of these realities as they have come to impact Arab societies: first, what would a sociology of colonial critique as emanating from the Arab world entail today, and what would its relevance be to an understanding of the changed colonial and neocolonial realities of the region? Second, what would such a critique provide by way of a contemporary sociology of the Arab world and the Global South more broadly?

Anaheed Al-Hardan is the Arcapita Visiting Professor of Arab Studies at the Middle East Institute and an Assistant Professor of Sociology at the American University of Beirut. She is the author of Palestinians in Syria: Nakba Memories of Shattered Communities (Columbia University Press, 2016).

Stathis Gourgouris from Columbia University will serve as interlocutor