The Left Reflects on the Global Pandemic: Gayatri Chakravorty Spivak 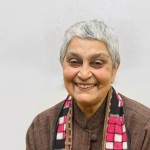 Join us for discussion with Gayatri Chakravorty Spivak, who will be interviewed by Monika Mokre, on Thursday, 7 May, at 13.00 EDT.

After registering, you will receive a confirmation email containing information about joining the webinar.

Note: You might be prompted by Zoom to download an executable file. This would be the Zoom app client. Alternatively, it should be possible to open Zoom through your browser.

As humanity faces the catastrophic COVID-19 pandemic, unprecedented in recent times, the left internationally must address this crisis with both short and long term action, analysis and planning. We are active day by day, driven by the needs of our communities – this is already reshaping the way we do politics. We are building solidarity networks and launching campaigns to protect and work alongside the people that are hardest hit by the crisis. At the same time, we must think strategically and present alternatives for the future. There can be no going back to the vicious circle of austerity and poverty: We cannot allow the global reimposition of a failed system on the people. The radical left will pose alternatives to reinvent socialist politics for the 21st century: to build a new society that empowers and liberates us all.

transform! europe, the European network of political foundations and thinks tanks of the radical left, presents a series of interviews with left-wing thinkers to discuss these crucial issues and plan for the future we want to build. They will take place via Zoom and are open to the public on registration. In the second half of the interview, the audience can pose questions in written form via a Q&A box to the invited speaker.

Gayatri Chakravorty Spivak, Indian scholar, literary theorist, and feminist critic. She is a University Professor at Columbia University and a founding member of the establishment’s Institute for Comparative Literature and Society. Activist in rural education and feminist and ecological social movements since 1986. Her critical writings included In Other Worlds: Essays in Cultural Politics (1987), The Post-Colonial Critic (1990), Thinking Academic Freedom in Gendered Post-Coloniality (1992), Outside in the Teaching Machine (1993), A Critique of Postcolonial Reason (1999), Death of a Discipline (2003), Other Asias (2005), and Readings (2014). Spivak was awarded the Padma Bhushan, one of India’s highest honours, in 2013.

Interviewed by Monika Mokre, political scientist and an activist in the fields of migration, asylum and imprisonment. She has been a research fellow at the Austrian Academy of Sciences since 1991. Since 2009 she has been a senior researcher at the Institute of Culture Studies and Theatre History. She teaches at various universities, e.g. at the Institute for Cultural Management and Cultural Studies at the University for Music and Performing Arts and at Webster University Vienna. She is the chair woman of eipcp, European Institute for Progressive Cultural Policies, as well as a member of several committees and advisory panels in cultural and educational affairs.