The World After the Russian Revolution 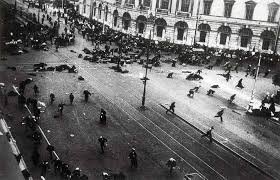 Department of History at Columbia University

A public conversation with Wang Hui, Susan Buck-Morss, and Harry Harootunian to be jointly hosted by the Institute for Comparative Literature and Society, Weatherhead East Asian Institute, Harriman Institute, Heyman Center for the Humanities, and the Department of History at Columbia University.

The 100th anniversary of the Russian revolution in 2017, coming in the wake of the recent 60th anniversary of the 1955 Bandung Conference on Afro-Asian cooperation, provides an important occasion to reassess the revolutions of the past for a better understanding of the contradictions of global capitalism in our own time. Three distinguished scholars, Wang Hui (Tsinghua University, Beijing), Susan Buck-Morss (The Graduate Center, CUNY), and Harry Harootunian (NYU) will join ICLS Affiliated Faculty members, Stathis Gourgouris, (Classics, English, and ICLS), and Bruno Bosteels, (Latin American and Iberian Cultures and ICLS) in a public conversation to reflect on the multifarious legacies of the Russian revolution.

How did the Russian Revolution give rise to distinctive vocabularies of the political universal that traveled and took shape in distinctive locales? What challenges did this pose for thinking political subjectivities through labor, migration, war and social upheavals? And how do such global movements emend the theory and history of Marxism?

Part of an ongoing project on Bandung Humanisms funded by the Center for Study of Social Difference.