‘Together We Can Create a Freer Future’: Digital Language Activism, Challenging and Reproducing Hegemonies | a talk by Ana Deumert 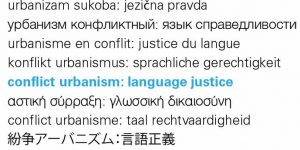 In February 2012, Mozilla announced its plans to translate the web browser Firefox into Quechua, a South American language. The initiative was linked to the runasimipi.org initiative which proclaimed in its manifesto: ‘The very act of using Quechua software is a political statement … Our dream is that any Andean child who goes to a cyber-café in the future will have the option to see everything in [their] native language. Together we can create a freer future’. Can digital technology – its historical English bias notwithstanding – become a tool for political empowerment of hitherto marginalized languages and their speakers/writers? The American linguist David Harrison called this the ‘flipside of globalization’: rather than assimilation to a dominant – mostly English-speaking global culture – we see a myriad of activities for which marginalized communities use digital media. This includes everyday linguistic practices (as discussed in Deumert and Lexander 2013), as well as various types of language activism which helps speakers/writers to gain visibility for their languages and ways of speaking in the global arena.

In this talk I argue that digital language activism can both reproduce and challenge existing political, social and linguistic hegemonies: on the one hand, persistent digital social inequalities mean that some people in the world have more opportunities for digital expression than others; on the other hand, digital media have created new opportunities for speakers/writers to make their voices heard. In my reflections on questions of digital equality, authority, visibility and voice, I draw on examples from across the world, and focus on three media platforms: texting, Twitter and Wikipedia

Ana Deumert is Full Professor at the University of Cape Town, South Africa. Her research is located within the broad field of African sociolinguistics and has a strong interdisciplinary focus (with particular attention to anthropology, sociology and economics). She has worked on the history of Afrikaans (The Dynamics of Cape Dutch, 2004) and co-authored Introducing Sociolinguistics (2009, with Rajend Mesthrie, Joan Swann and William Leap) and the Dictionary of Sociolinguistics (2004, with Joan Swann, Rajend Mesthrie and Theresa Lillis). Her latest book looks at mobile communication from a global perspective (Sociolinguistics and Mobile Communication, 2014). Ana Deumert is editor of IMPACT – Studies in Language and Society (Amsterdam/New York: John Benjamins) and co-editor of Cambridge Approaches to Language Contact (with Salikoko Mufwene).

Organized by the Center for Spatial Research and the Institute for Comparative Literature and Society as part of the Conflict Urbanism: Language Justicelecture series.

This lecture series focuses on the role of language in structuring cities, bringing together speakers to address the ways that urban spaces and their digital traces are physically shaped by linguistic diversity, and to examine the results of languages coming into contact and conflict.

Other lectures in the series: