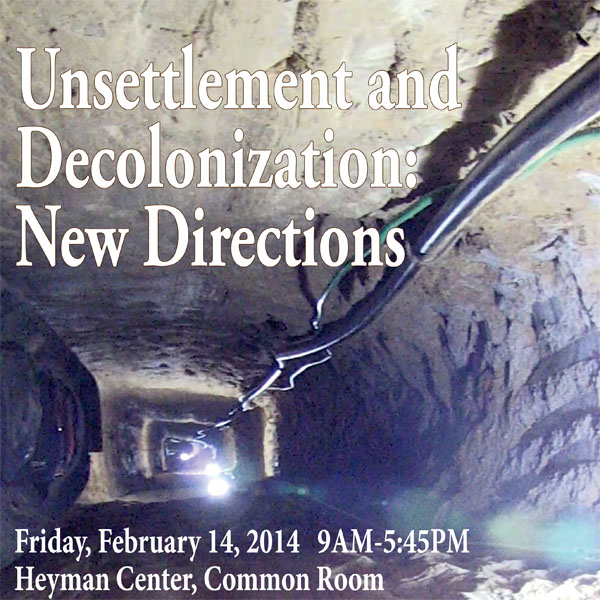 The Heyman Center for the Humanities, Common Room

Jodi A. Byrd (English and American Indian Studies, University of Illinois at Urbana-Champaign).

In 1923, Iroquois leader Levi General (best known by his title, Deskaheh) visited Geneva. The purpose of his visit was to petition the League of Nations to uphold the claim of the Iroquois Confederacy to nationhood. Under pressure from Britain, the United States, and Canada, Deskaheh’s petition was ignored by the League.

What does this moment of geopolitical misrecognition mark—across an archipelago of simultaneously distinct and comparable experiences of settler colonialism? What, further, is the nature of the fundamental political aspirations and assertions of the fourth world in relation to settler colonial power that has emerged after such impasses as Deskaheh’s mission to Geneva? In the absence of either recognition at the level of nation state-hood, or an alternative geopolitical formation (for instance of the kind instantiated at the Bandung Conference by third world nation-states 30 years after Deskaheh’s mission), indigenous peoples have evolved multiple strategies of political organization.

On the one hand, an alternative internationalism has emerged, culminating very recently in the 2006 United Nations Declaration of the Rights of Indigenous People. On the other, the largely symbolic nature of this international order has meant that the politics of recognition has dominated indigenous politics across the fourth world. Do these strategies operate as decolonizing strategies? Even after the United Nations Declaration, indigenous peoples in Australia and Canada still rely on appeals for recognition from settler nation states in order to assert political rights.

In the United States and Aotearoa New Zealand, a comparable and yet distinct politics of recognition attends upon the history of treaty making (and breaking) and assertions of sovereignty that recall multiple specters from Deskaheh to Waitangi. What extant and possible avenues exist for transnational solidarity in light of the plural (and sometimes, arguably, incommensurable) modes by which indigenous peoples have elaborated decolonizing strategy in light of settler colonization? Further, might this comparison extend to settler colonial situations wherein subalternity is not predicated on precisely the same concept of indigeneity (such as in the Occupied Palestinian Territories)?